This virtual benefit concert will feature two artists and TASC's ASL Choir. The concert is in tribute to Ken Lane. Access to the concert is free with a suggested donation to TASC.

Zoom (link will be sent with RSVP) 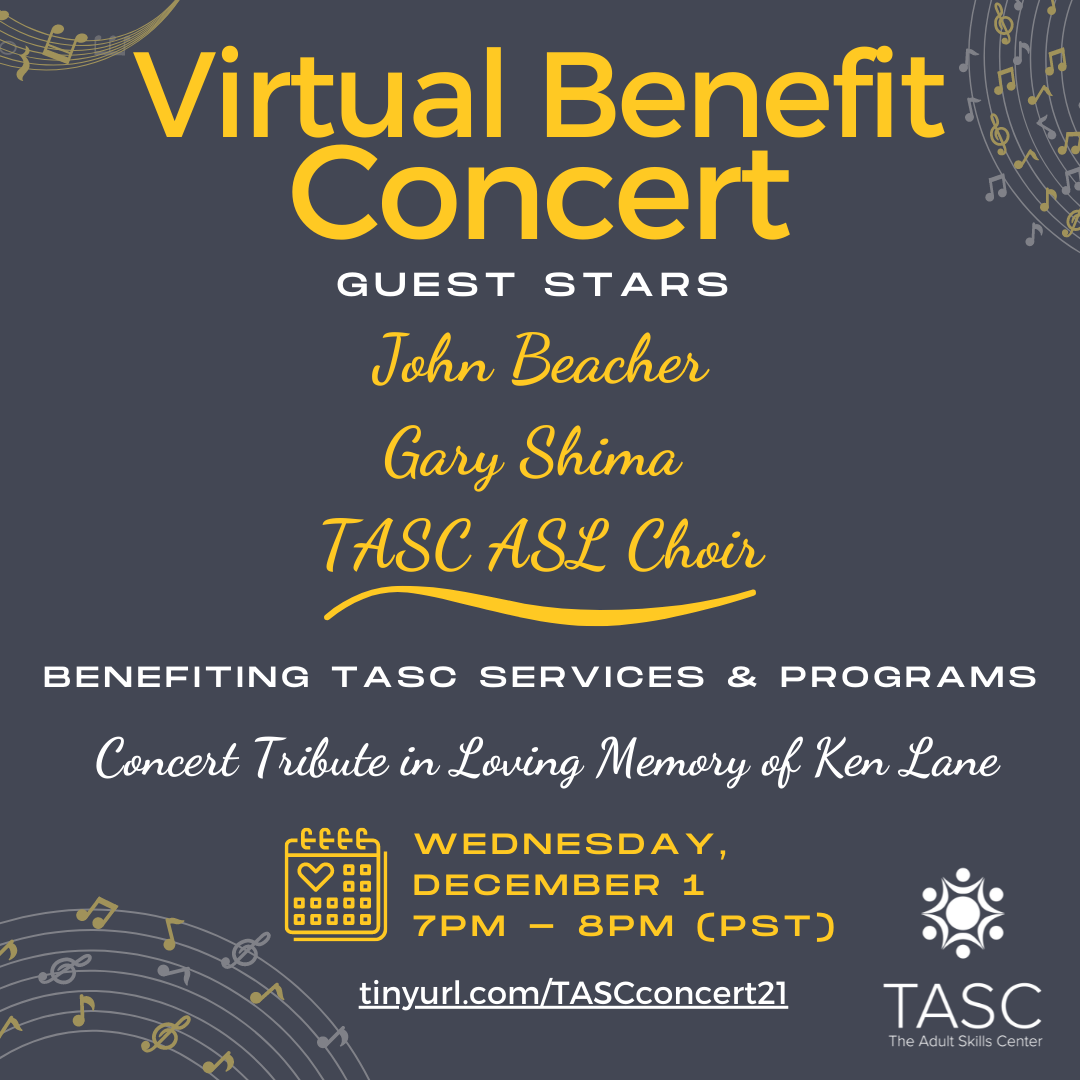 A Night Of Uplifting Music, Giving Back & Simply Having Fun!

Once you RSVP, the link to the virtual event will be shared with you. The concert will be streaming on Zoom.

A dynamic songwriter, natural performer and “hope enthusiast,” John Beacher has built his decade-long career not only with talent but a genuine spirit and kind heart. John’s music is a homecoming for the soul, timeless and sincere, and taps into a source that runs far deeper than the songwriter himself. Rooted in rhythm and blues yet unbound by genre, each song is a musical tapestry woven with soulful threads. Whether he’s singing songs of social justice, belting out blues or funk, or serenading the audience with a love ballad, there is no doubt that John is completely one with the musical process. Equipped with an acoustic guitar, a few effect pedals, and a loop station, Beacher creates music that seems impossible for one person.  His ability to connect with his audience, as well as improvise on guitar and voice makes each performance an entirely unique and interactive reflection of the his surroundings.

With over 15 years of performing experience Beacher has shared stages with national acts such as Leon Russell, Cheryl Wheeler, Rusted Root, Marshall Tucker Band, and Dean Ween Group, and Elephant Revival to name a few.

John has twice performed at the Philadelphia Folk Festival and his music is regularly featured on 88.5 WXPN out of Philadelphia PA, as well as many other independent radio stations across the country. Learn More

Born and raised in Honolulu, Hawaii. Influenced by watching a live production of “Westside Story.” Music was in his blood; At 9-years-old Gary asked his mom for a guitar. Gary is self-taught and was influenced by The Beatles, Soul and Christian music.
He has performed at clubs, outdoor concerts, and has traveled on the west coast, the Philippines and Australia.

A highlight of TASC's special events, TASC American Sign Language (ASL) Choir is comprised of clients, families, employees, and community members. Albertina Nunez has led the ASL Choir for the past several years by interpreting the songs into ASL, then teaching the group how to sign. The ASL Choir previously performed during TASC's Talent Shows, and now in a virtual environment during this post-COVID-19 era. Regardless of a physical stage or virtual screen, the universal power of music, movement and unity continues to make the ASL Choir shine with each performance.

TASC is a 501(c)(3) nonprofit organization that empowers individuals with intellectual and developmental disabilities to achieve their highest level of independence and realize their greatest potential. Learn More